Skip to content
DL Sam Acheampong headlines group after being selected in the second round, 20th overall to the Toronto Argonauts

WATERLOO, Ont. (May 1, 2020) – It was another night of celebration for the Wilfrid Laurier Golden Hawks men’s football program on Thursday as three members of the team were selected in the 2020 Canadian Football League (CFL) Draft.

Defensive lineman Sam Acheampong of Brampton, Ont., was chosen in the second round, 20th overall by the Toronto Argonauts with their territorial pick. He was followed by linebacker Brad Cowan of Ottawa, to his hometown Ottawa Redblacks in the sixth round, 47th overall. Laurier’s final selection was linebacker Tanner Cadwallader of Georgetown, Ont., who was selected in the seventh round, 64th overall by the defending Grey Cup Champion Winnipeg Blue Bombers.

The three selections gives the Golden Hawks 13 players drafted into the CFL in the last four years, all of whom were recruited and developed by current head coach Michael Faulds and his staff.

“Our whole program is pumped to have three more Golden Hawks names called in this year’s CFL draft,” said Faulds on the selections. “All three players are heading to great teams and have the opportunity to make an impact immediately.”

Acheampong, who made it three consecutive years of having a Laurier player chosen in the second round, joins four other former Golden Hawks currently on the Argonauts roster, including last year’s draft choices receiver Kurleigh Gittens Jr. and defensive lineman Robbie Smith, as well as linebackers Nakas Onyeka and Chris Ackie.

May as well call them the Toronto Golden Hawks! Another @LaurierFootball joins the Boatmen as @TorontoArgos select @samkoa_! #SoarAbove #CFLDraft 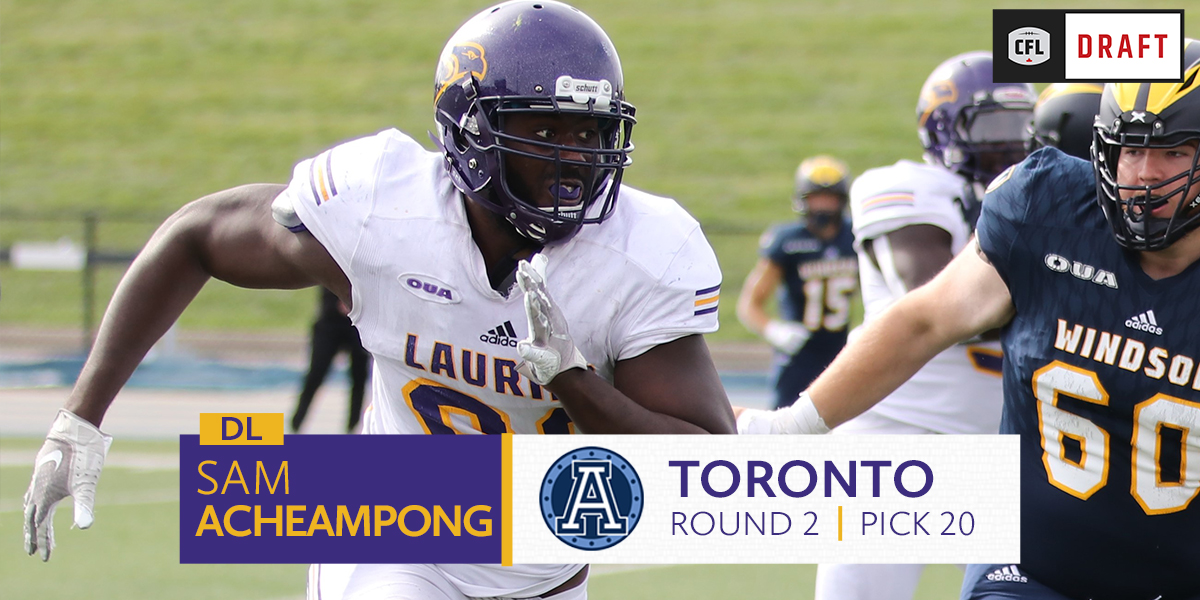 22 people are talking about this

The 6-5, 262 lbs. defensive tackle is coming off the best season of his four-year career at Laurier. The graduate of Cardinal Ambrozic CSS was named an OUA First Team All-Star after recording 19 tackles and 5.5 sacks in eight games for the purple and gold.

“Sam was a lock to get selected,” said Faulds on Acheampong’s selection. “We are really happy that he gets to play in his hometown and joins so many other former Hawks.”

Cowan, a 6-3, 228 lbs. linebacker, will get the opportunity to suit up for his hometown Redblacks after putting up a strong season in 2019 following a lost 2018 campaign due to injury. The South Carleton HS graduate posted 28.5 tackles and 2.5 sacks in eight games for the Hawks.

He’s heading home! Congrats to Brad Cowan on being selected by his hometown @REDBLACKS #SoarAbove #CFLDraft 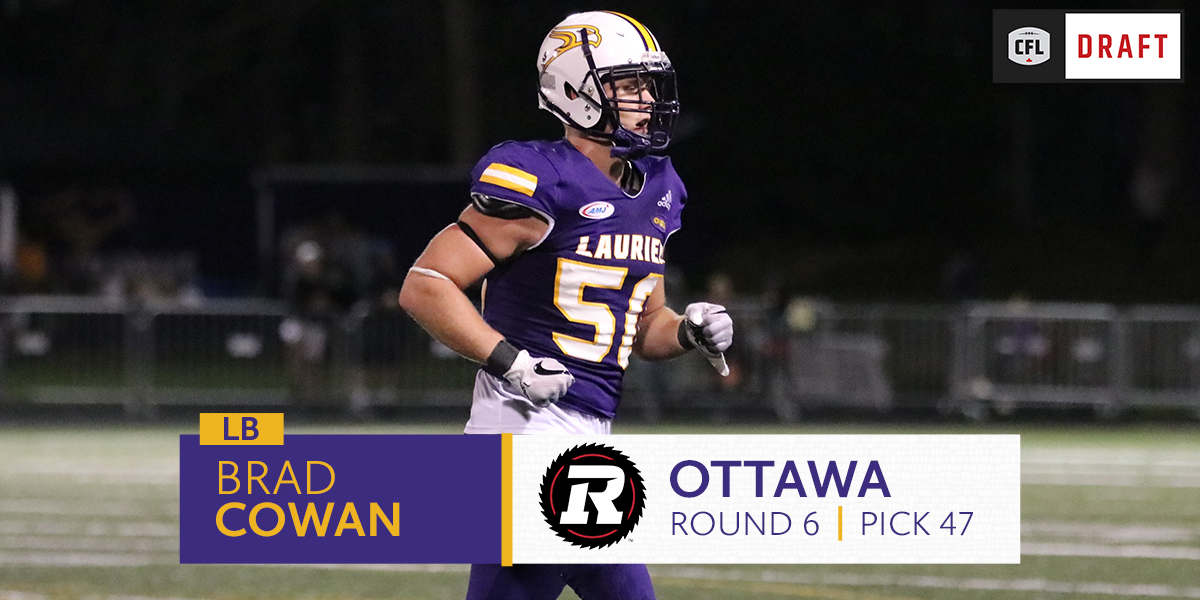 20 people are talking about this

As for Cadwallader, the 5-11, 215 lbs. linebacker heads out west after suiting up for Laurier from 2016 to 2018. Over that time, he posted 12.5 tackles in 13 regular season games. Last season, he spent the year with the London Beefeaters of the Canadian Junior Football League, recording 26 tackles, two sacks and three interceptions in eight games.

LB Tanner Cadwallader is off to @WPG_BlueBombers as the 3rd and final Golden Hawk selected in the 2020 CFL Draft! #SoarAbove #CFLDraft 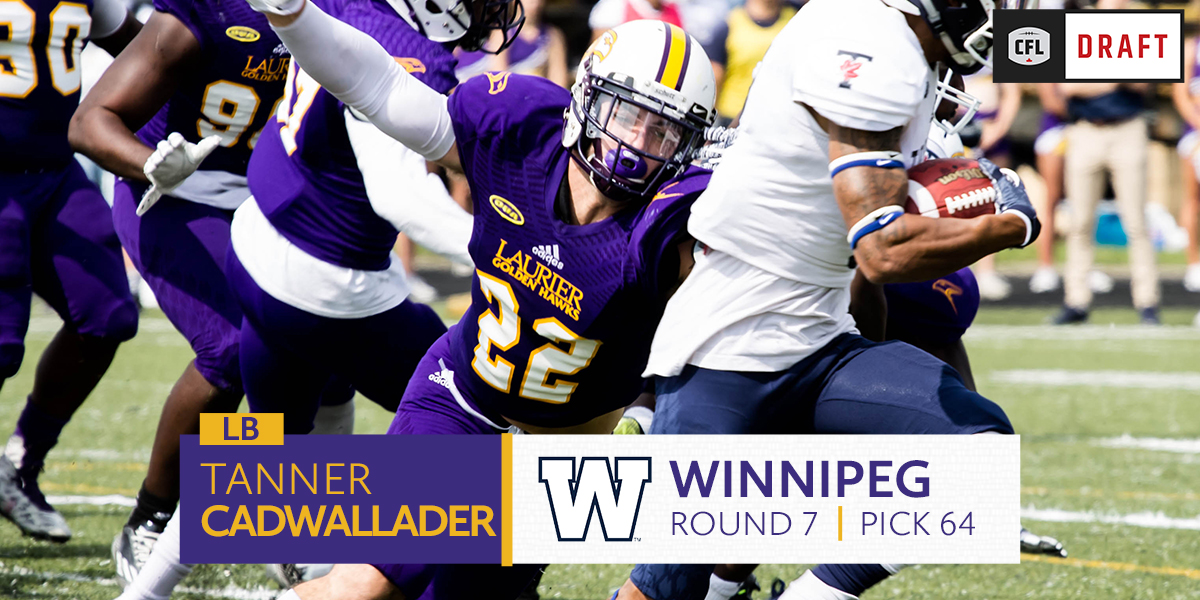 “Brad and Tanner are both great examples of hard work and being able to deal with adversity,” commented Faulds on their selections. “Brad missed a whole season with a severe wrist injury and to see him come back healthy last year and to now get to play pro football in his hometown of Ottawa is special. As for Tanner, he is an absolute workout warrior and has tirelessly earned everything the hard way. To be drafted by the Grey Cup champs in Winnipeg is really cool for him and I know he will impact their special teams right away.”

CFL DRAFT BY THE NUMBERS

Day ☝🏼 of Training Camp!
FOOTBALL.STARTS.THIS.WEEK
Players report to Training Camp in 1⃣ week! Football is almost back Golden Hawk 🏈 fans!
Rohan Thompson started as a linebacker for five years from 1998 to 2002. He was a two-time OUA first-team all-star and was selected as the team's MVP in his final season. In 2008, he was inducted into the Golden Hawks Hall of Fame.
🚨 COACHING ANNOUNCEMENT
Training Camp is only a few weeks away Golden Hawk Fans. Before camp opens, check out the latest newsletter from Coach @michaelfaulds.